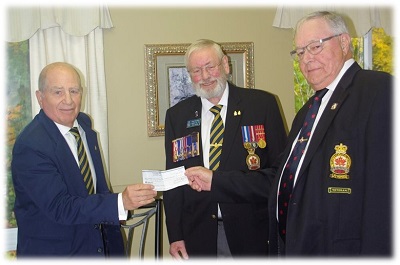 Branch 057 made a donation in the amount of $5,000 to the Lakeshore Legion Housing Association. 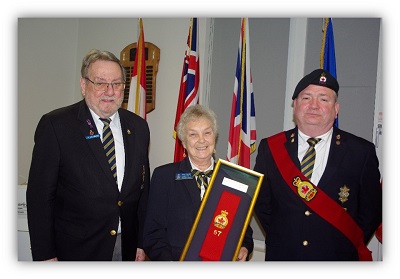 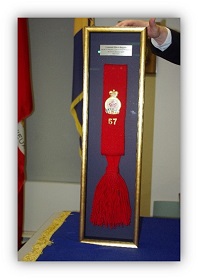 At a recent general meeting of Pointe-Claire, Qc, Branch 057, the Branch Sergeant-at-Arms sash worn for seventeen years by the late Sergeant-at-Arms Comrade Harry Baggott was presented to Comrade Margaret Thomas, his partner.

As can be seen in the attached images, the sash was displayed in a shadow box frame.

The idea for displaying the sash in a shadow box was proposed by the newly appointed Sergeant-at-Arms Comrade Robert Crockett who made arrangements to have the box built.

The presentation to Comrade Thomas took place in the presence of the Branch President, Guy Vallières and Sergeant-at-Arms Robert Crockett.

Comrade Thomas, in accepting the framed sash remarked that it would be displayed in a prominent place in her home as a constant reminder of her long-standing relationship with Comrade Baggott. 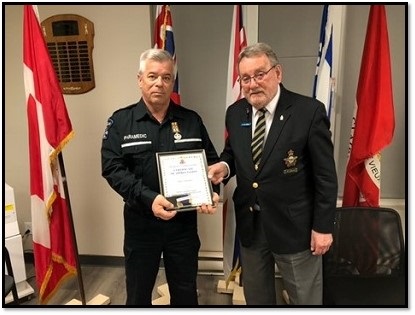 Comrade Barry Christensen, a member of Branch 057 and a long-serving Emergency Medical Technician (EMT) was recognized recently for his frontline EMT work during the pandemic. Branch President Guy Vallières presented Comrade Christensen with a Legion Certificate of Appreciation and a Legion Service Medal.

Comrade Christensen manages his “Socks to them” programme, a programme in which about twenty thousand pairs of socks are distributed to homeless people including Veterans.

In making the presentation, Comrade Vallières remarked that Comrade Christensen was a prime example of how a Legion member can become actively involved in the community.